Most of the females (see the text below)

Firearms, explosives, melee combat, advanced seduction, dark magic, manipulation
Sindri Behemotovaya Bisitsokoshkha (or Sindri for short) is a female hell-cat officially serving as a member of the Socialist Advisory Command Moscow (SACM) and one of the regular Team Pussycat's antagonists created by TeeJay87.

Sindri was born to Behemoth the Hell-cat and his concubine Dedryanna in Chertovo Kolyesyo, the capital of the Frozen Hell. Her exact date of birth remains unknown, though it is certain she did witness the birth of Kievan Rus, establishing the Czarate in Russia, the Romanov Dynasty Period and of course, the entire history of the Soviet Union.

She has been trained to the role of a political officer from birth, learning how to manipulate mortals in any possible way. The moral degeneration of the Russian society, lasting since 1917, did help Sindri much in maintaining her goals as Infernal Commissariat of Socialist Affairs' Commissar.

As it can be expected from a demoness, Sindri is inherently evil. She delights in causing suffering by manipulating the desires of mortals and tempting them into depraved acts that they would normally avoid, though she does not refrain from performing acts of physical cruelty if there is an opportunity. Bisitsokoshkha generally believes herself to be entitled to do whatever she wants, whenever she wants to do it.

Behemoth's daughter enjoys male company, regardless of the species, rank or nationality. She loves to surround herself with male companions -  by frequently taking and discarding lovers at her leisure and has a tendency to be lecherous. While Sindri understands the value of forging bonds, she views the virtue of honesty as a sign of weakness.

On the other hand, Sindri is known to have a rather complicated approach to other females - while Behemotovaya does respect her mother Dedryanna and her sisters, this sentiment does not apply to her nieces, other female demons and mortal women; she feels a disdain to the latter.

The Infernal Commissariat of Socialist Affairs provides more detailed and much more demanding combat training than the Soviet/Russian Army does; as a result, Sindri knows how to handle all the Russian and Western firearms from pistols to heavy machine guns. Her weapon of choice is a fiendish-crafted AK-47 rifle for range combat and a cruel-looking whip as a melee weapon.

Being a woman of socialism, Behemotovaya had also gained the ability to handle armored vehicles, both as a driver and as the weapons' operator. Before her deployment to Moscow, she also learned how to pilot the military aircraft used by the Soviet and the Russian Air Force.

Sindri has a couple of abilities unique for her species:

Bisitsokoshkha's demonic heritage allows her casting dark magic spells without the need of preparing them. She is an expert in casting charms, evocations, and necromancy used both to spread socialism and to appease her own needs. Sindri is also emitting a suppressing aura of evil, weakening good-aligned mortals and rebuking the socialists.

Being an intermediate-ranked fiend herself, Behemotovaya is also vulnerable to Christian ceremonies performed in the open area. If exposed to a wedding led by a preacher, a Corpus Christi procession or a similar event, Sindri is disoriented for one minute, then she is expelled back to Hell for one thousand years unless a leftist summons her to the mortal realm after her banishment.

Quite unusual for her nature, Sindri maintains fine relationships with her parents, male children, siblings, and nephews, not necessarily the nieces.

She envies her older step-sister Vlondril being the SACM leader, but as long as their parents are in power, she reluctantly obeys her sibling's commands.

Sindri had romantic affairs with various male demons and mortals, resuming in the fiendish and half-fiendish progeny. Bisitsokoshkha has been traditionally accepting to raise her biological sons, though she never took care of any of her biological daughters due to Sindri's innate disdain towards other females - her sisters and cousins had to bring up Sindri's daughters.

As a SACM advisor in Moscow and a chekist herself, Sindri knows much about the Moscovian proletariat:

Bisitsokoshkha's disdain towards females extends to the female members of Team Pussycat, whom Sindri envies beauty and the respect they have from their males. Speaking of which, Behemotovaya does find Stan, Ian, Thomas, Al and Butch more attractive than her comrades from the Russian Communist Party, though she never succeeded in tempting them. Especially the Zaleski brothers turned out charm resistant since none of them would spend even a single evening with the incarnation of the leftist evil.

All the images below have been drawn by Sindri's creator - TeeJay87. 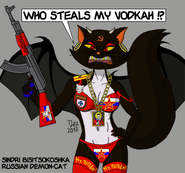 Sindri's 2017 design, without the hairdo. She is wielding fiendish-crafted AK47 rifle.

With Igor somewhere in the Sayian Mountains in Siberia.

Promoted to the colonel rank in Season 4.
Community content is available under CC-BY-SA unless otherwise noted.
Advertisement