Rasputin Vodka is an 80% strong alcoholic beverage popular among the Russian Communist Party. The "vanguards of the Moscovian Proletariat" never go outdoors without at least one bottle around themselves. Dolt-on-Istov, Boris Badenov, Natasha Fatale, Paskudnikov, Silly Vassily, Olga Salotchkinaya, Igor Tolstyi, and Sindri are often seen carrying those vodka bottles; Doltie even received the decanter of never-ending Rasputin Vodka from his fiendish mistress.

The exact recipe of this vodka brand remains unknown - since it has a greater volume than spirits sold in the West, it is certain that the aforesaid liquor is distilled synthetically. Known distilleries are located in the following places:

Apart from the standard pure vodka, there are also available flavored variants with reduced volume, though they are more popular within the leftist societies westwards from the Bug River. 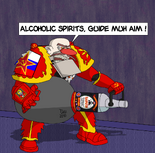 Perfect drink for a date behind the Iron Curtain.

No party led by the Russian Communist Party can do without the liquor. 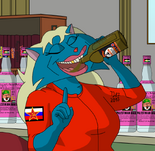 Olga drinking one of the flavored Rasputin Vodka brands.
Community content is available under CC-BY-SA unless otherwise noted.
Advertisement