Not much is known about Olga, due to the FSB policy of keeping their members' personal data secret. She was born in the 1950s as a native Moscovian herself to "a model proletarian family". Having joined the KGB in the second half of the 1970s, she married a feline Soviet Army officer named Mitrofan Salotchkin, whom she gave a son named Alexei Mitrofanovych Salotchkin. After a couple of family issues, Olga did report her husband to the KGB and nothing more was heard of him.

Salotchkinaya is currently involved in various plots against the Team Pussycat and the stability in Europe.

Since her early childhood, Olga has always been vain and short-tempered. The Soviet education filled her with the same megalomania her colleagues Dolt-on-Istov and Paskudnikov perform in public.

As it can be expected from a chekist, Salotchkinaya has limited trust towards most of the individuals, which is often seen in searching for "betrayal of the communist dogma" she is performing with considerable efforts.

The KGB/FSB personnel undergoes the same firearm training as the Soviet/Russian soldiers do, plus they learn how to handle Western firearms. Olga did barely manage to pass the training - she is confident with pistols, AK47, AKM and AK74 and with no other firearm. Salotchkinaya is such a poor marksman she has trouble in handling sniper rifles. Her body shape makes Olga surprisingly good at handling machineguns, even the heaviest one as NSV and KPV, though she is not fond of "such cumbersome guns".

Olga is also good at throwing hand grenades - rumors say she never leaves her flat in Moscow without at least one stick grenade, hidden behind her jacket.

Salotchkinaya has been a quite skilled bully at her school-age - she honed the talent to interrogate prisoners taken by the KGB and FSB, both in using physical violence and in performing verbal abuse.

Olga has never maintained healthy bonds with her parents - after completing the KGB officer course, she did have them sent to a GULAG in Siberia and their current fate remains unknown. The same fate happened to her former husband Mitrofan and a couple of her lovers, who let her down.

Only her son Alexei Mitrofanovych avoided the fate of GULAG prisoner - only because he successfully escaped to the West with his own lover Olga never accepted.

Just like any RCP member, Salotchkinaya has her own preferences:

Despite considering the Polish as inferior people to Russians, Olga did make attempts to woo Stan and Ian on more than one occasion. She has always been repelled - both by the Zaleski brothers' stance towards the occupants and by their females standing on their side. Salotchkinaya also tried approaching Alexander, Thomas and Butch - "dating the Pindos" also ended up bad for Olga.

All the images below have been drawn by Olga's creator - TeeJay87. 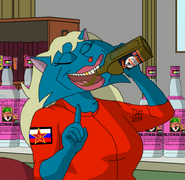 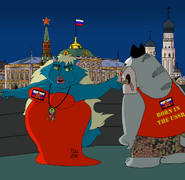 On a date with Igor.

Beauty Contest in Miami. Somehow Olga has been disqualified. 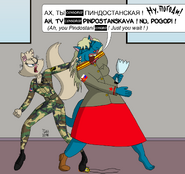 Olga is poorly skilled in hand-to-hand combat.
Add a photo to this gallery
Retrieved from "https://fanongarfield.fandom.com/wiki/Olga_Salotchkinaya?oldid=5565"
Community content is available under CC-BY-SA unless otherwise noted.