The United States Rifle, Caliber 7.62 mm, M14, or better known as the M14 rifle, is an American select-fire rifle that fires 7.62×51mm NATO (.308 in) ammunition rounds. It became the standard-issued rifle for the U.S. military and U.S. Marine Corps after replacing the M1 Garand. The Marines soon replaced it with the M16 rifle. The M14 was used by the U.S. Army, the Navy, and the Marine Corps for basic and advanced individual training (AIT) from the mid-1960s to the early 1970s.

The M14 was the last American battle rifle to be issued in a large quantity to the U.S. military personnel. It was soon replaced by the M16, the reason being that the M16's cartridge was lighter. The M14 rifle still remains in all branches of the U.S. military as an accurized competition weapon. It is used as a ceremonial weapon by the honor guards, the color guards, the drill teams, the ceremonial guards, and as a sniper rifle/designated marksman rifle. Semi-automatic civilian models are used for hunting, plinking, target shooting, and shooting competitions.

Team Pussycat members often use both the standard and scoped M14 rifles during missions when 7.62mm NATO rounds are easy to obtain. Penelope Pussycat, Mona Pussycat, and Delilah Pussycat are especially skilled in handling this type of rifle.

Only a few members of the Comintern know how to handle the rifle, which is commonly considered behind the Iron Curtain, as a "relic of the capitalist bourgeoisie decadence", due to the fact that it surpasses their same-class rifles. Sindri Bisitsokoshkha and Igor Tolstyi happen to consider the M14 as superior to their SKS and SVD rifles, though they prefer not to show off their sentiment in public.

From the "Dunes of Jihad" episode.

From the "Los Gangbangerers" episode. 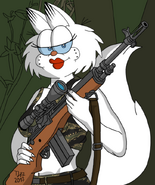 Add a photo to this gallery
Retrieved from "https://fanongarfield.fandom.com/wiki/M14_Rifle?oldid=5807"
Community content is available under CC-BY-SA unless otherwise noted.