Garfield Fanon Wiki
Register
Don't have an account?
Sign In
Advertisement
in: The Pussycats, Weapons, Technology,
and 2 more

The M-16 rifle, officially designated the Rifle, Caliber 5.56 mm, M16, is a United States military adaptation of the ArmaLite AR-15 rifle. The original M16 was a 5.56mm automatic rifle with a 20-round magazine, originally developed to be deployed in the Vietnam War. A couple of NATO countries, along with the U.S. Armed forces, still use it today.

Lightweight and accurate (up to 800 effective meters), the 5.56mm M-16 rifle family is the second most common rifle type in the world, after the AK-47.

Nicknamed "The Black Rifle", it remains one of the Pussycat's favourite weapons for use. Despite firing weaker rounds than the M14 Rifle and Avtomat Kalashnikova, it retains a good rate of fire, combined with superior accuracy to the AK47. Due to the small size of the .223 rounds, the ammo might be brought over a 7.62mm rifle's.

The Team Pussycat members use the following rifles from the M-16 family:

The Comintern does not use what they call, the "products of decadent American capitalism", and officially rely on their own-made firearms. The truth is that the M-16 rifles require diligent maintenance, something that cannot be expected from the average "vanguard of the communist paradise on earth".

Dolt-on-Istov and Paskudnikov did attempt, without much success, to handle M-16 rifles in the "Paskudnikov-Tou and Old Dolty-Hand" episode. Igor Tolstyi is said to like the M-16's rifle design, despite having trouble wielding it, due to the weapon's shape. Only Sindri Bisitsokoshkha and her relatives from Chertovo Kolyesyo are capable of handling "the Black Rifle" effectively, although they are more fond of the Kalashnikov firearms. 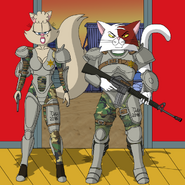 Ian Zaleski wielding an M-16A1 rifle in his right hand.
Community content is available under CC-BY-SA unless otherwise noted.
Advertisement