Jon Arbuckle (owner)
Odie(enemy/friend), Nermal(enemy/friend), Arlene(girlfriend), Penelope Pussycat (ex-girlfriend) , Mona (temporarily), Miss Kitty (temporarily), Lola (temporarily), Gwen (temporarily), Garf(brother)
A fat, lazy, cynucalm but endearing cat. Born in the kitchen of Mamma Leoni's Itailian restaurant, Garfield weighed five pounds, six ounces at birth and right from the start he showed a passion for Italian food. The restaurant owner, forced to choose between Garfield and closing his doors for lack of pasta, sold Garfield to a pet store. Garfield thought he was a goner until Jon Arbuckle walked in the door -- The Rest Is History.

Garfield is the titular main and primary protagonist of the long-running franchise of the same name, created by Jim Davis.

Often throughout the course of the strip, Garfield's weight has been poked fun at as an object of ridicule, frequently by the electronic scale which he uses to weigh himself. Garfield usually does not handle insults or commands from the talking scale RX-2 (or anybody else) very well, and will normally respond to such remarks with a either saucy comment and/or comeback or some sort of threat of violence, in spite of the fact that the character solely communicates through thought bubbles.

Garfield lives with his nerdy, socially awkward owner Jon Arbuckle and Jon's dimwitted pet dog Odie, and derives pleasure from satirically mocking the stupid actions performed by the two of them. Garfield seems to intensely abhor Odie (as obviously expected from the assumed common hatred shared by cats and dogs) and derives joy from causing him physical harm or insulting him, seldom showing empathy for the beagle. Albeit Odie shows Garfield no belligerence of any kind and would never deliberately cause him harm (though Odie does occasionally prank Garfield and has made fun of his weight and more recently his age), Garfield despises him nonetheless and is apt to make rude and saucy comments based on the utter lack of intelligence displayed by Odie, though at times it is not entirely clear whether Odie actually is stupid or not. However, Odie is not the only target of Garfield's taunts; he frequently insults and pokes fun at Jon as well for his nerdy behaviors, and unpopularity with women, along with his unconventional, eccentric fashion sense.

Despite his sometimes selfishness and sheer laziness, Garfield loves both Odie and Jon nonetheless, as well as his beloved teddy bear Pooky, which is frequently seen in his arms or close to its owner.

In The Garfield Show, while Garfield still retains his signature traits, he is considerably more compassionate and willing to help his friends.

Over the years, Garfield's appearance has changed greatly. In the first couple of years of the strip, he looked more like a real Exotic Shorthair cat and was fatter. Overtime, Garfield started to get smaller and less morbidly obese. He also started gaining more human tendencies such as walking on two feet (previously he walked on four), but has remained silent for the rest of the strip.

Throughout the franchise, Garfield is known for having internal monologue that is converted into text via thought bubbles. In the Lorenzo Music era, his mouth was always closed, since it is established that he and the other animals cannot talk. However, they seem to communicate with each other through some sort of telepathic connection.

It is never clear if the humans can understand what Garfield is saying. Sometimes, it appears that the humans can hear his thoughts and Garfield can order things on the phone without worry, but Garfield always establishes his inability to talk.

Starting with the live action films, Garfield's mouth now moves when he has dialogue, making it a bit more hard to tell whether or not he can talk.

Jon often gets calls from neighbors about his cat destroying their flowerbeds or harassing them.

His hatred towards spiders almost always results with them being whacked with a rolled newspaper or stomped by his foot. He occasionally does the same to other insects such as flies (in some strips, he is shown to hate flies more than spiders).

He likes to eat ferns and other types of flowers. Liz once said that the reason Garfield eats Jon's houseplants is that he is so out of shape that plants are one of the few things that is easy for him to catch. Some strips feature common flowers talking to each other, only to be eaten by Garfield in the end.

Besides kicking Odie off the table, when outside, Garfield enjoys teasing other dogs; they are usually chained up or smaller in size than Garfield. However, he occasionally faces the misfortune of the chain/rope not being securely tied (resulting in Garfield being chased and/or injured by the dog), or the dogs are not as small/weak as they seem. He also likes to torment Herman Post, the mailman, but Herman occasionally gets the last laugh. Next to Odie, Jon is his favorite person to prank. When Jon is asleep, Garfield often goes to extreme measures to wake him up -- whether it be hopping on his stomach, waking him with different monster masks on his face, throwing his bed out of the window with him in it, frightening Jon, knocking him off the bed after playing the radio and talking like a drill sergeant with Odie playing the cymbals, or even attempting to throttle him (as he does in some early strips), Garfield always seems to have the upper hand on Jon's sleeping habits.

Garfield's other favorite pranking victim is Mrs. Feeny. He loves to prank her, and abuse her little dog. This makes her hate Garfield, often sending threatening letters to him. She goes to great lengths to try and keep him out of her garden as well, often to no avail.

Garfield can also be a rude slob, with almost no manners. Among the rude things he likes to do is burp very loudly. On two occasions, Garfield goes out of his way to burp louder than Jon does; when Jon states that not everything is a contest, Garfield replies "Said the loser."

On January 8, 2009, he displays a certificate announcing his election into the Bad Habit Hall of Fame. Afterwards, he crumples up the certificate and tosses it behind him. 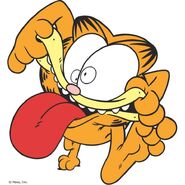 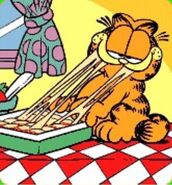 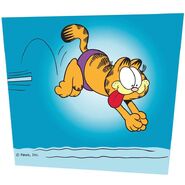 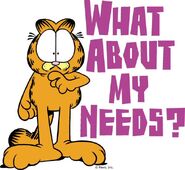 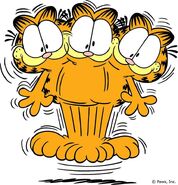 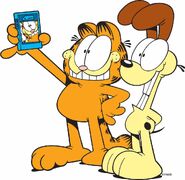 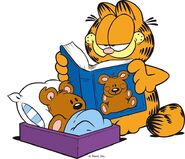 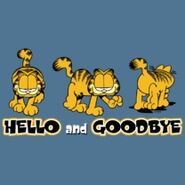