Garfield Fanon Wiki
Register
Don't have an account?
Sign In
Advertisement
in: Females, Cats, The Pussycats,
and 4 more

Callista Briggs (Queen Callista in her native realm) is a character originally appearing in "SWAT Kats: The Radical Squadron" episode "Bride of the Pastmaster", who was adapted for "The Pussycats" series as a member of the Team Pussycat.

In Medieval times, there was a realm known as Megalith City ruled by Queen Callista. The monarch was the target of the unwanted affections of an undead sorcerer known as "The Pastmaster", who attempted to siege Callista's kingdom in an attempt to force the Queen to marry him and become his consort. Through the use of a magical amulet, she wore on a chain, Callista herself was a magic wielder, but her abilities were not as advanced as the Pastmaster’s.

For reasons unknown, the SWAT Kats were brought back to the Dark Ages by a time vortex and encountered the Queen and her guards. At first thinking them enemies, Callista had her guards attack, until Razor withdrew the Dragon Sword from the stone, signifying him as the hero that would defeat the Pastmaster. This also earned Razor Callista’s affections, much to the chagrin of T-Bone.

Callista was later abducted by the Pastmaster, who used a small army of Cyclops monsters to attempt to level Megalith city. In exchange for the safety of the city, Callista agreed to marry the Pastmaster but quickly withdrew the offer when the SWAT Kats bested the Pastmaster’s forces. As the Pastmaster attempted to escape with his captive aboard a dragon, the SWAT Kats intercepted (ironically with T-Bone making the day-saving shot using a missile with the Dragon Sword attached to it).

Queen Callista was able to use her magical abilities to send The SWAT Kats back to their own time but not before recognizing the heroism of Razor with a respective kiss on the cheek.

Shortly after being defeated by the SWAT Kats, the Pastmaster made another attempt to win his beloved one's heart. While casting "Summon Fiend" spell, he established contact with Behemoth the Demon Cat, who agreed to help the Pastmaster in his romantic affairs in exchange for his soul - by giving him a scroll with "Frozen Hell Ice Storm" spell.

Standing in front of Megalith City walls, the Pastmaster cast the spell from the scroll, invoking the harshest cold and bitter ice of the Frozen Hell. When Callista attempted to counter the spell with her magic, a warp rift suddenly opened and sucked all the Megalith City inhabitants inside. The Pastmaster was teleported to the Frozen Hell and taken captive by Behemoth himself. The fate of the remaining Megalithians is unknown.

Having lost consciousness inside the warp rift, Queen Callista woke up in the modern times Megakat City, differing much from those she was accustomed to. Her original lovers T-Bone and Razor found her and did their best to find her accommodation in Megakat City - due to a minor incident with Callie Briggs about Razor and not being accustomed to such amount of modern technology, Callista was hosted by Penelope Pussycat and Mona Pussycat at their ranch, where she met the remaining Team Pussycat members.

Currently, she is providing them magical backup against Sindri Bisitsokoshkha and similar extraplanar threats. At the same time, her new friends are doing their best to make her reunited with Razor again.

As the Queen of Megalith City, Callista was a just and fair monarch, treating her subordinates as they deserved. After initial mistrust towards T-Bone and Razor, she quickly learned their value.

The loss of her kingdom initially caused Callista a sorrow, which was mildened by the reunion with Razor. Being relocated to Team Pussycat, Callista found a common language with their members. Despite not being the top leader, she feels confident as a trusted member of the team.

Callista still feels affection towards Jake "Razor" Clawson, though the existence of Callie Briggs disturbs much in expressing those feelings. The deputy mayor of Megakat City remains jealous of her male and keeps obstructing all the ideas of sharing Jake with someone else, even with biological relatives. Razor visits Callista at the Pussycats' whenever he has an opportunity, yet those are rather short meetings.

Not a queen anymore, still managed to found a decent company for herself.

It should not be surprising, that Callista feels an exasperation towards the Russian Communist Party members - apart from their monarch-murdering traditions, the proletariat simply behaves in a way a queen would be never fond of:

After traveling to the modern times, Callista retained her magical abilities to cast evocations. She made research during missions and managed to learn additional ones from various sources, especially the abjuration spells she uses to protect herself and teammates against Sindri's dark magic.

Being a monarch of a small kingdom, the only weapon Callista was accustomed to was a knife or a dagger. Delilah trained her how to handle American firearms, while Ian showed her the way of handling Russian weapons. The former Megalith City queen feels most confident with a 0.45 pistol or revolver as side weapon and M14 rifle as a longer weapon. She is not fond of Russian firearms, mostly due to the recoil they cause while firing. 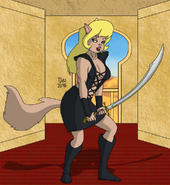 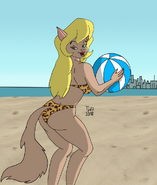